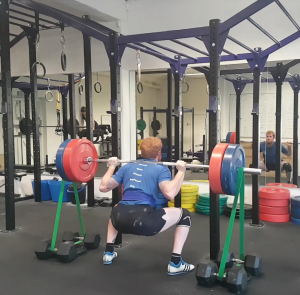 Here’s a surefire way to increase your Strength/Power and smash any plateaus you might have hit!

It’s essential that proper form and technique is used when lifting weights. It’s even more essential that we have the strength in our structures to accommodate any negative stress lifting places on our soft tissues… You can still get injured while lifting with good form.

Lifting slowly (and for high reps) is essential for the development of our soft tissues, specifically our slow twitch fibres and supporting structures (tendons). However, the concept that you must always lift slowly is absolutely flawed!

When you lift Maximal loads (above 90% of 1RM), you are (well should be) lifting the weight as fast as you can. It just looks slow because it’s a really heavy weight.

Ultimately, Maximal Effort lifting will elicit the most strength gains and in doing so, turn you into a faster and more powerful individual (fast twitch fibres). However, just as we also want to work endurance (slow twitch fibres). We also want to lift in a way that maximises joint velocity (speed).

Essentially we want to target each aspect of the Force Velocity Curve (Maximal Strength/Strength-Speed/Power/Speed-Strength/Speed), and obviously place more emphasis on the areas which are more applicable to our sport/goals.

In Strength & Conditioning environments, often the coaches develop Maximal Strength with compound movements such as Squat, Deadlift and Press variations, while developing Speed-Strength with Olympic Lifts (to effectively clean 70kg, you need to produce about 120kg of force).

This is a great training method. However, loaded speed work should not be restricted to two lifts… We can effectively develop Power and Speed-Strength with all of the lifts (often far easier to incorporate and teach)… Think about the force developed during a Dynamic Effort Deadlift or a Loaded Jump using a Hex/Trap Bar.

When working on Dynamic Effort lifts, we generally work around 50-60% of our 1RM and often add Accommodating Resistance to that… The bar speed should be around 0.8m a second. However, just because you don’t have a Tendo Unit to measure your bar speed, does not mean you shouldn’t incorporate speed lifting… Do you think the Russians neglected speed work when they didn’t have the technology to record it.

Remember, huge amounts of energy is created during the Eccentric (downward) Phase. Therefore, this should be capatalised on (Stretch Reflex), just like it is during Plyometric work… Do you slow your jumps down before you recoil into your next jump? Of course not, gravity pulls you down at 9.8m a second and you want to use the elastic energy produced upon landing (that’s plyometrics, it’s not just jumping on a box).

Note: Speed lifting is for those who have adequately developed their strength and technique to accommodate any negative stress.